The French media ('Le Monde' newspaper) clarifies the message of Glen Sweetman's US Department of Energy report. It appears that next year, 2011, will be the beginning of the great decline in oil production - not 2012.
This could be fatal for New Zealand's business community, which has 'bet the farm' on huge numbers of fans arriving for next year's Rugby World Cup. A sharp jump in the cost of oil will rocket-up the prices of all goods and services - which are also likely to be subject to a degree of good old profiteering. Add the impact of 15% GST - and you have the real prospect of empty stadiums, hotels and venues.
Is this why the Auckland City Council is refusing to underwrite the gold-plating of Eden Park?

Washington considers a decline of world oil production as of 2011
The U.S. Department of Energy admits that “a chance exists that we may experience a decline” of world liquid fuels production between 2011 and 2015 “if the investment is not there”, according to an exclusive interview with Glen Sweetnam, main official expert on oil market in the Obama administration.

This warning on oil output issued by Obama’s energy administration comes at a time when world demand for oil is on the rise again, and investments in many drilling projects have been frozen in the aftermath of the tumbling of crude prices and of the financial crisis.
Glen Sweetnam, director of the International, Economic and Greenhouse Gas division of the Energy Information Administration at the DoE, does not say that investments will not be “there”. Yet the answer to the issue of knowing when, where and in which quantities additional sources of oil should be put on-stream remains widely “unidentified” in the eyes of the most prominent official analyst on energy inside the Obama administration.
The DoE dismisses the “peak oil” theory, which assumes that world crude oil production should irreversibly decrease in a nearby future, in want of suffisant fresh oil reserves yet to be exploited. The Obama administration of Energy supports the alternative hypothesis of an “undulating plateau”. Lauren Mayne, responsible for liquid fuel prospects at the DoE, explains : “Once maximum world oil production is reached, that level will be approximately maintained for several years thereafter, creating an undulating plateau. After this plateau period, production will experience a decline.”
Glen Sweetnam, who heads the publication of DoEs annual International Energy Outlook, agrees that what he identifies as a possible decline of liquid fuels production between 2011 and 2015 could be the first stage of the “undulating plateau” pattern, which will start “once maximum world oil production is reached”.
M. Auzanneau - After 2011 and until 2015, do you acknowledge that if adequate investment is not there, a chance exists that we may experience a first stage of decline in the “undulating plateau” you describe ?
GLEN SWEETNAM - I agree, if the investment is not there, a chance exists that we may experience a decline. If we do, I would expect investment in new capacity to increase if there is still demand for oil.
Glen Sweetnam acknowledges the possibility of a close-by and unexpected fall of world liquid fuels production in an email interview, after several requests of details about a round-table of oil economists that Mr Sweetnam held on April 7, 2009 in Washington, DC.


The DoE April 2009 round-table, untitled “Meeting the Growing Demand for Liquid (fuels)“, was semi-public. Yet it remained unnoticed and unjustly, as it put forward forecasts that are far more pessimistic than any analysis the DoE has ever delivered.
Page 8 of the presentation document of the round-table, a graph shows that the DoE is expecting a decline of the total of all known sources of liquid fuels supplies after 2011.
The graph labels as “unidentified” the additional supply projects needed to fill in a gap that is expected to grow after 2011 between rising demand and decline of known sources of supply that the DoE supposes will start that year. The declining production foreseen by the DoE concerns the total of existing sources of liquid fuels plus the new production projects that are supposed to come on-stream before 2012.
The DoE predicts that the decline of identified sources of supply will be steady and sharp : - 2 percent a year, from 87 million barrels per day (Mbpd) in 2011 to just 80 Mbpd in 2015. At that time, the world demand for oil and other liquid fuels should have climbed up to 90 Mbpd, according to the presentation document.
“Unidentified” additional liquid fuels projects would therefore have to fill in a 10 Mbpd gap between supplies and demand within less than 5 years. 10 Mbpd is almost the equivalent of the oil production of Saudi Arabia, world top producer with 10.8 Mbpd. 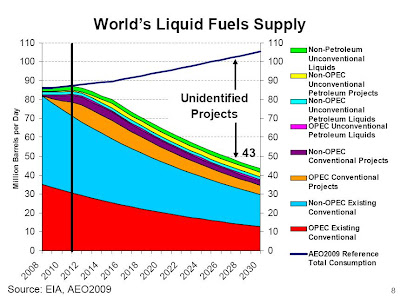 After the oil demand went through an air pocket in 2009, it is to rise afresh this year, according to the International Energy Agency (IEA), which advises the OECD countries. Now set at 86.5 million barrels per day, the world consumption is slightly higher than in 2008, when the financial crisis stroke. All the growth of the demand is now coming from non-OECD countries. This growth should continue at a firm pace in developing economies over the next years, says the IEA.
According to the presentation and the transcript of DoEs April 2009 round-table, many oil producing regions should see their extractions diminish before 2015.
Non-OPEC conventional oil extractions (more than half of the world crude oil production today) should already be in decline, from 46.9 Mbpd in 2008 to 44.8 Mbpd in 2011, shows the graph page 8 of the DoE round-table presentation.
Total non-OPEC liquid fuel production has been stable since 2008, says the IEA in Paris. But the IEA does not provide figures dealing with just conventional crude oil extractions. In 2005, in the French newspaper Le Monde, the IEA chief economist Fatih Birol predicted that non-OPEC oil production would decline “soon after 2010″.
Till 2015, among the top 15 oil producing countries, only 6 will manage to significantly increase their liquid fuel production, shows the graph page 9 of the DoE round-table presentation.
7 of the 15 biggest producers are supposed to evolve towards substantial reductions of their outputs over a period starting in 2007 and ending in 2015 : Russia (- 0.15 Mbpd), China (- 0.2), Iran (- 0.4), Mexico (- 0.9), the United Arab Emirates (- 0.3), Venezuela (- 0.25) and Norway (- 0.7).
Iraq’s and Koweit’s supplies should remain practically flat.
The U.S DoE expects that the largest increase of production will need to come from within the United States : a 1.8 Mbpd boost over 8 years (from 2007 to 2015) that would equal to more than a quarter of the present U.S oil production. Since the early 70’s, U.S oil production has been steadily plummeting. 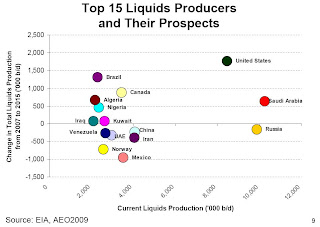 This huge U.S liquid fuel production increase should be achieved through what Glen Sweetnam described as “the ethanol ramp-up” during the round-table, according to its
transcript.
This “ethanol ramp-up”, initiated during the Bush administration, may stand for even more than the 1.8 Mbpd increasing expected by the DoE, as U.S crude oil extractions have been decreasing for four decades, and because there are no fresh oil reserves of significant scale coming on-stream in Alaska or elsewhere in the ‘Lower 50s’.
One-quarter of all the grain crops grown in the United States already ends up as biofuel, according to an analysis of 2009 figures from the US Department of Agriculture published by the Earth Policy Institute, a Washington ecologist think-tank.
Will investments in new and “unidentified” oil projects be able to compensate for the decline of the existing sources of supply, in order to fill in within less than 5 years (between now and 2015) the 10 Mbpd gap between demand and identified supplies that the DoE foresees ?
It takes at least 7 years to get any new oil project running, acknowledges the DoE.
During the Spring 2009 conference, Glen Sweetnam said that the recent discoveries of ultra-deep oil off the shores of Brazil were “sort of the bright spot for now (…) till we get to the Arctic”.
OPEC Secretary General Abdalla Salem El-Badri warned in February 2009 that out of the 135 projects due to come on-stream in the next few years, OPEC members have put 35 projects on hold to after 2013, as the “current prices threaten the very sustainability of planned investment”.
By 2007, despite huge profits, the top 5 international oil companies were spending a mere 6 percent of their free cash on exploration, compared to 34 percent on share buybacks, according to a Rice University study cited by The New York Times. Back in 1994, those top oil companies were spending 15 percent of their free cash on exploration. Many experts assume that this shift in strategy is forced by a lack of access to new oil reserves, while the world keeps clamoring for more oil.
The prospects of the Washington Department of Energy on oil now sound far more pessimistic than the kind of analysis the DoE used to release not so long ago. In 2004, under the Bush administration, the DoE published a study in which oil production was supposed to be able to rise strongly at least until 2037.
In 2008, Glen Sweetnam published for the DoE a long term base case scenario in which the “undulating plateau” was not to be reached until 2030, and would last until 2090 before world oil production would enter its final fall.
But Mr Sweetnam’s 2008 study also presented a “more unfavorable above ground factors” scenario under which the undulating plateau occurs during the present decade.
Glen Sweetnam, who is supervising in Washington the preparation of the next annual International energy outlook, now seems to wonder whether his “more unfavorable” scenario isn’t the right one, when he contemplates, in his interview with me, a decline of world liquid fuels production starting in 2011.
Such a sense of uncertainty cast by the Department of Energy is unseen. The DoE usualy stands among the most optimistic sources regarding the issue of depletion of world oil reserves.
Glen Sweetnam’s warning comes after a long set of warnings dealing with possible troubles ahead on the supply side of the world oil market. Those warnings have been emitted over the last years through a range of sound sources such as The Wall Street Journal, The Houston Chronicle (main daily newspaper of the world capital of crude oil trade), the CEO of Brazilian oil company Petrobras, a former n°2 of Saudi national oil company Aramco, an International Energy Agency ‘whistleblower’, the chief economist of the IEA himself, the UK Industry Taskforce on Peak Oil & Energy Security, or legendary-wildcatter-turned-renewable-tycoon T. Boone Pickens.
Matthieu Auzanneau
Posted by Fare-Free NZ Editor at 9:26 AM