'Maybe buses should be free' - The Economist 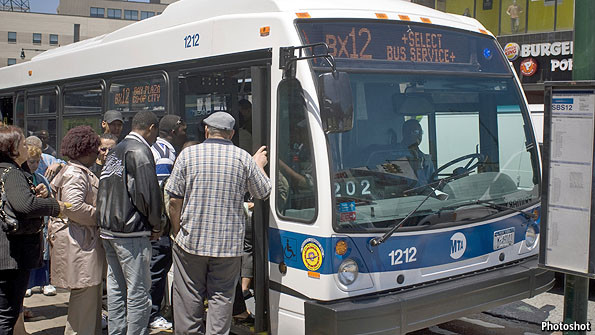 The Economist. Jun 19th 2013, 13:55 by N.B. | WASHINGTON, D.C.
AFTER riding a tram in Strasbourg, Matt Yglesias, a blogger with Slate, has decided that proof-of-payment fare-collection systems—in which fares are enforced by inspectors who levy steep fines when they catch you without a proper ticket—are better than pay-per-ride systems for public transport. But there's a more radical proposal that could work even better: making public transport free.

Proof-of-payment systems would undoubtedly be an improvement on the inefficient systems that currently dominate American city bus and subway lines. A few years ago a group of engineers at New York's Metropolitan Transit Authority (MTA) calculated the amount of time wasted as passengers waited to board and pay fares on a single run of the Bx12 Limited bus route in the Bronx. The answer was 16 minutes and 16 seconds, or over a quarter of the entire run. A proof-of-payment system would save much of that.

Since that study, MTA has moved to proof-of-payment systems on several lines, including the Bx12 Limited. Waiting times have fallen and average speeds have improved. But making the buses free could work even better.

It's not as crazy as it sounds. Fares bring in a lot of money, but they cost money to collect—6% of the MTA's budget, according to a 2007 report in New York magazine. Fare boxes and turnstiles have to be maintained; buses idle while waiting for passengers to pay up, wasting fuel; and everyone loses time. Proof-of-payment systems don't solve the problem of fare-collection costs as they require inspectors and other staff to handle enforcement, paperwork and payment processing. Making buses and subways free, on the other hand, would increase passenger numbers, opening up space on the streets for essential traffic and saving time by reducing road congestion.

It's worth a second look

In New York, the idea of free buses and subways dates back to at least 1965, when Ted Kheel, a lawyer, first floated the idea—and pushed for a doubling of bridge and tunnel fares to make up for lost revenue. Kheel died in 2010, but the modern version of his plan, which would include a congestion charge for cars and trucks entering the Manhattan business district, lives on. The big push by New York's mayor, Michael Bloomberg, for congestion-pricing was blocked by the state legislature in April 2008; in 2009 he proposed making cross-town buses free, but that idea has yet to be implemented. It's worth a second look.