'Jaywalking': How the car industry outlawed crossing the road 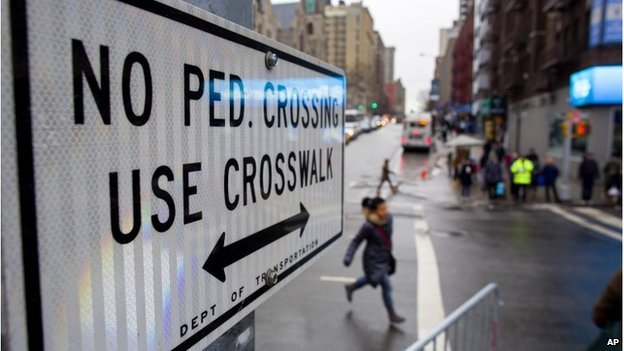 The idea of being fined for crossing the road at the wrong place can bemuse foreign visitors to the US, where the origins of so-called jaywalking lie in a propaganda campaign by the motor industry in the 1920s.

The California Vehicle Code states: "No pedestrian shall start crossing in direction of a flashing or steady "DON'T WALK" or upraised hand symbol." It also forbids crossing between controlled intersections, or "jaywalking".

Late last year, police began a concerted effort to enforce the rules in central Los Angeles. Pedestrians had been "impeding traffic and causing too many accidents and deaths", one traffic police official said. Fines range from $190-$250 (£115-£152).

Then in New York officials responded to several pedestrian deaths last month by issuing a flurry of tickets for jaywalking. The campaign quickly ran into controversy when an 84-year-old Chinese immigrant who had been stopped for jaywalking suffered a gash to his head during an altercation with the police.

Enforcement of anti-jaywalking laws in the US is sporadic, often only triggered by repeated complaints from drivers about pedestrian behaviour in a particular place. But jaywalking remains illegal across the country, and has been for many decades.

The first known reference to it dates to December 1913, says Peter Norton, a history professor at the University of Virginia and author of Fighting Traffic - The Dawn of the Motor Age in the American City. That month a department store in Syracuse hired a Santa Claus who stood on the street with a megaphone, bellowing at people who didn't cross properly and calling them jaywalkers.
"I don't know how this got to Syracuse, but in mid-western slang a jay was a person from the country who was an empty-headed chatterbox, like a bluejay," he says.
The word was first used to describe "someone from the countryside who goes to the city and is so dazzled by the lights and the show windows that they keep stopping and getting in the way of other pedestrians".

The use of jaywalking as a term of ridicule against pedestrians crossing roads took off in the 1920s.
A key moment, says Norton, was a petition signed by 42,000 people in Cincinnati in 1923 to limit the speed of cars mechanically to 25mph (40kph). Though the petition failed, an alarmed auto industry scrambled to shift the blame for pedestrian casualties from drivers to walkers.

Local car firms got boy scouts to hand out cards to pedestrians explaining jaywalking. "These kids would be posted on sidewalks and when they saw someone starting to jaywalk they'd hand them one of these cards," says Norton. "It would tell them that it was dangerous and old fashioned and that it's a new era and we can't cross streets that way." 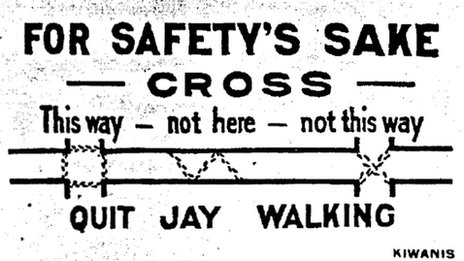 A card handed to pedestrians in Hartford, Connecticut, in 1921

Clowns were commonly used in parades or pageants to portray jaywalkers as a throwback to rural, ignorant, pre-motor age ways.

Another ruse was to provide local newspapers with a free service. Reporters would submit a few facts about local traffic accidents to Detroit, and the auto industry's safety committee would send back a full report on the situation in their city.

Soon, he adds, car lobby groups also started taking over school safety education, stressing that "streets are for cars and children need to stay out of them". Anti-jaywalking laws were adopted in many cities in the late 1920s, and became the norm by the 1930s.


Breakdown of all trips made in the US

In the decades that followed, the cultural ascendancy of the car was secured as the auto industry promoted "America's love affair with the automobile". Car makers portrayed them as the ultimate expression of personal freedom, an essential element of the "American dream".

"For years, pedestrians were essentially written out of the equation when it came to designing streets," says Tom Vanderbilt, author of Traffic - Why We Drive the Way We Do.

"They didn't even appear in early computer models, and when they did, it was largely for their role as 'impedance' - blocking vehicle traffic."

This made US cities unusually hostile to walkers, says Vanderbilt. Jaywalking became an "often misunderstood umbrella term", covering many situations in which the pedestrian should in fact have the right of way.

Some countries have followed the lead of the US and imposed anti-jaywalking measures. Police in China began a fresh push to stop jaywalking last year, fining offenders and in Shanghai, making them read out traffic regulations aloud. 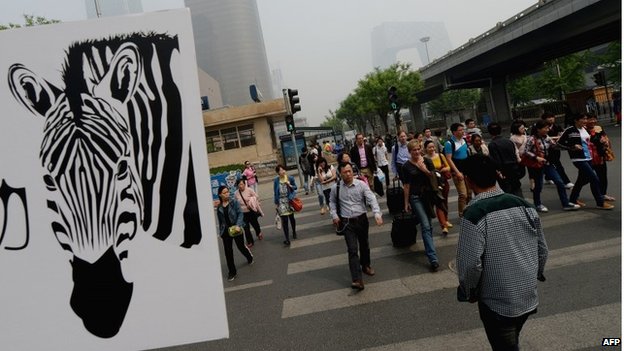 Elsewhere, in Cairo say, or Calcutta, a lack of rules, enforcement and pedestrian infrastructure mean that the only way to cross the road is often by launching oneself into the oncoming traffic.

Even in Singapore, where repeated jaywalking offences can lead to a $1,000 fine or a six month jail term, rules are routinely flouted.

There has been resistance in the US too. Newspaper reports from the 1920s show that many were irritated by the cards handed out by boy scouts, says Peter Norton.

In New York, an earlier effort to crack down on jaywalking under former mayor Rudy Giuliani met with opposition from police officers who said they had better things to do. And in Los Angeles, the setting for The Pedestrian, Ray Bradbury's dystopian science-fiction short story from 1951, walkers and cyclists have recently become more common downtown.

When the LAPD advertised the anti-jaywalking campaign on its Facebook page, responses accused the police of seeking an easy source of revenue by fining people with the means to pay, and of wasting their time.

"I love how I see people getting jaywalking tickets everyday at the corner of 5th and Broadway by our loft, and yet I can't walk to my car without getting offered… any variety of hardcore narcotics," wrote one woman in a message that ended "#priorities".

Advocates for walking say drivers are most often to blame for pedestrian deaths and injuries, and that there is no evidence to prove that anti-jaywalking campaigns are effective.

That rings true for John Moffat, a former commander of Seattle's traffic police.
Seattle was known for being especially strict on jaywalking, and Moffat calculated that some 500,000 tickets had been issued there between the 1930s and the 1980s. But he oversaw a change of policy in 1988 after a study in the city showed that the most vulnerable pedestrians were the elderly, children and drunks - not jaywalkers. "Are they the ones ending up in the morgue or in hospital?" he says.

"The answer is no, and the reason is that most of them are pretty fleet of foot and agile."
Some think that the success of several projects to make US cities more walkable is a sign of hope for pedestrians.

But there is little experimentation with more radical projects such as shared space, which aims to reduce traffic speed by removing the distinction between streets and pavements. And fines for jaywalking look set to continue, says Ray Thomas, a lawyer in Portland, Oregon, who specialises in pedestrian and bicycle law.

"People in law-enforcement tend to identify with a motorist's perspective", he says. Wherever there's a push to protect the rights of pedestrians, officials feel they also need to enforce limits on them.
"It's their version of being fair," he says. "The difference is that no jaywalking pedestrian ever ran down and killed a driver, and by sheer survival strategy most pedestrians don't jaywalk in front of cars."