Do you feel crowded? 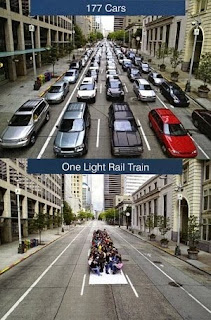 Posted by Fare-Free NZ Editor at 12:11 PM No comments:

What is a good transit system?

1.A Good Transit System has Frequent and Convenient Transportation for all.

3.A Good Transit System Helps Encourages People to Leave Vehicles at Home and Help out our Environment.

6A Good Transit System Helps Reduce the COST and NEED for PARATRANSIT.

10.A Good Transit System Treats their Employees with Respect.

...Even before this new farce began it was beginning to look as if it might be too late to prevent two or more degrees of global warming. The nation states, pursuing their own interests, have each been passing the parcel of responsibility since they decided to take action in 1992. We have now lost 17 precious years, possibly the only years in which climate breakdown could have been prevented. This has not happened by accident: it is the result of a systematic campaign of sabotage by certain states, driven and promoted by the energy industries. This idiocy has been aided and abetted by the nations characterised, until now, as the good guys: those that have made firm commitments, only to invalidate them with loopholes, false accounting and outsourcing. In all cases immediate self-interest has trumped the long-term welfare of humankind. Corporate profits and political expediency have proved more urgent considerations than either the natural world or human civilisation. Our political systems are incapable of discharging the main function of government: to protect us from each other....Guardian via CommonDreams

Posted by Fare-Free NZ Editor at 10:28 PM No comments:

All buses are free in Cache Valley, Utah

In the Cache Valley Region, Utah, all buses are free.

This is why they have free public transport according to the Cache Valley Transit District:

If any fare were added, a significant amount of time would need to be added to the current schedule to accommodate people depositing fares. The addition of a fare reduces CVTD’s ability to provide convenient and timely service.

Research conducted by independent transportation consultants indicate that CVTD’s ridership could drop considerably if fares were added. If ridership dropped it could place hundreds of vehicles on our already congested roads.

There are various reason people may be uncomfortable with riding the bus—getting lost, riding with people they do not know or missing the bus. The addition of fare would add to the list, causing more questions like "what is the fare," "do I need exact change," or "what if I don’t have cash?" Being fare-free keeps it simple and increases ridership.

The cost to install infrastructure for fares would be between $400,000 and $500,000. Significant additional ongoing costs would be incurred such as fare box maintenance, counting of fares, training and collection of fares by an armored car service.

Posted by Fare-Free NZ Editor at 8:40 AM No comments:

Hey …let’s also look at the system in Hasselt, Belgium, where there are no fares! And no more traffic gridlock!
Public transport should be regarded as an essential public service and be fare-free – a relatively simple way to help reduce traffic congestion and pollution big time in these days of global warming.
Fares only contribute a portion of the cost, but cost an enormous amount to collect. Why bother? There are other ways to pay for public transport – for starters the millions of dollars currently being spent on building more and more roads (which we all know will be clogged up in no time), could be diverted to urgently upgrade Auckland’s public transport. A vast integrated network of modern low-emission buses and electric trains could be rapidly moving people about, with no delays as passengers get on and off without having to fumble for change or cards.
If we are really serious about getting people out of cars and on to public transport, making it fare-free and frequent is the way to go.

Check out views and articles on: farefreenz.blogspot.com

The advantages of free public transit are enormous and extremely beneficial for all citizens of the European Union:
Read more at Ecohumanworld
Posted by Fare-Free NZ Editor at 8:18 PM 4 comments: