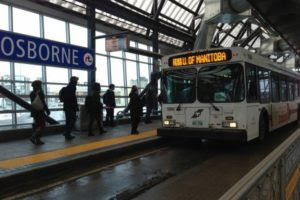 After the February murder of Winnipeg transit operator Irvine Jubal Fraser, and other violent attacks, there is a push for transit cops to be introduced in Winnipeg.


Conducted a month after Fraser’s murder, a survey has now been widely publicized finding 64 percent of respondents favour the introduction of transit police, despite 75 percent believing Winnipeg Transit is safe. Those who “strongly” or “moderately” feel safe drops to 49 percent for night buses with 38 percent feeling unsafe.
Winnipeg’s transit workers and riders deserve safety, but are transit cops the answer? It certainly seems to be the only question being asked. The news reports about this survey do not appear to ask any other question about safety measures. Were survey respondents asked about protective shields for operators, improved lighting and safety design of transit stops, emergency phones at transit stops, or a concerted public safety initiative?
If we are serious about reducing violence on public transit, we need to examine the leading source of violence against transit workers: fare disputes.


Fare disputes are the biggest problem

A 2016 survey of transit operators by the Amalgamated Transit Union (ATU) found 74 percent of assaults on operators arose from fare disputes. Survey respondents were allowed multiple answers. “Inadequate service” and “high crime area” were the second most cited reasons, but they were a distant 35 and 32 percent, respectively.


Another more extensive 2005 survey of seven Canadian ATU locals found fare disputes the source of 60 percent of physical assaults and 71 percent of verbal assaults (cited on p.17-18 of this study).
If fare disputes is the leading reason for verbal and physical violence against operators and fare collectors, then we need to look seriously at eliminating fares from transit services. Not looking at this option is simply irresponsible. Can we provide the service free at the point of use and fund it like other free public services through progressive taxation? This question is not even being asked but now is the time to raise it.
But let’s look at what’s being pushed right now: transit cops.

The fact is transit cops simply cannot be on every single bus and at every single transit stop. They are not going to stop those determined to make an attack on operators. Nor will transit cops be able to stop every attack that erupts with a fare dispute. The Toronto Transit Commission employs dozens of “Transit Enforcement” officers but this hasn’t stopped an average of one transit worker being assaulted each day.
Where transit police don’t exist, local police are involved anyway in violent attacks. This means transit cops actually spend most of their time focusing on fare evasion which is an enormous expense.
Yet, just like a regular police force, transit cops are placed in an adversarial position with the public and it is “the usual suspects” who are going to be on the receiving end of their main job of fare enforcement. Poor people, Indigenous people, people of colour are going to be these usual suspects.
Racial profiling and overreach by transit cops is already a problem where they exist. Transit cops in Vancouver, for example, go far beyond their mandate in reporting hundreds of suspected illegal immigrants to the Canada Border Security Agency. This is the sort of police conduct that Trump is trying to enforce by repealing “Sanctuary City” policies in major urban centres like Boston, New York City, Seattle, Los Angeles, Miami and numerous other cities, as well as Toronto, Hamilton, Montreal and London, Ontario (There is also some movement in Winnipeg to become a Sanctuary City). The Sanctuary City policy is simple: municipal workers do not ask people’s immigration status. Nobody is doing the CBSA’s job for them. This raises all sorts of questions about what Vancouver’s transit cops think they’re doing.
(It is worth noting that in the labour movement it is a widely common practice among union organizers that we do not ask about people’s immigration status when talking shop and signing cards. Our goal is solidarity, not strengthening the hand of bigots.)

Transit cops in Toronto, Montreal, Vancouver and numerous other cities have all been involved in incidents of excessive force, misuse of tasers, and even deadly shootings. A tragic example of this is the murder of Oscar Grant by transit police on the Bay Area Rapid Transit in Oakland.
Transit cops also cost a lot of money that could otherwise put people to work providing direct transit services, from maintenance to station attendants to operators. It is money that could go to better use.
For example, in 2014, Metro Vancouver Transit Police cost $34 million. The operation employed 167 sworn officers and 67 civilian staff. That same year, two transit expansion proposals were left unfulfilled. A $28 million per year plan to add 11 new B-Line express bus routes was abandoned. A $59 million a year plan to lift overall bus service by 25 percent was scrapped. Transit police costs could have covered one and contributed to the other.

As with any public space, safety is of incredible importance. But transit cops will not solve the problems of violence. They never do. In a handful of incidents they will make a difference, but they’ll also drag in a whole number of other problems, problems that plague every police force: targeting of stereotyped people, excessive force, and big costs. We already have police forces anyway.
There are other safety measures that we can also take, safety measures that routinely neglected by transit management and politicians. 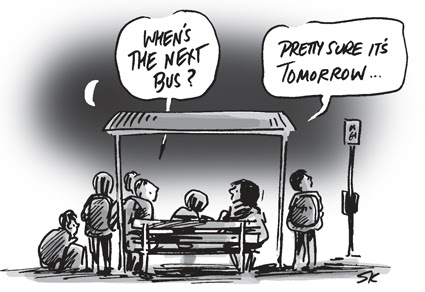 First, improved transit infrastructure means improved safety. Far too many transit stops have terrible lighting and only major transit stop have emergency phones.
Second, night services need to be more frequent and more extensive. Night buses often serve areas only hourly, leaving us waiting alone at stop for long periods of time. Similarly, they serve too few areas, leaving us to make longer walks than usual to our final destination. For low-wage service workers, janitors and other workers dependent on public transit, bus service often dries up between 10pm and 6am, leaving us to spend money on cabs.
Third, we need sustained public safety campaigns for public transit. Posting public safety procedures on buses, trains, bus stops and transit facilities is nothing new. It is a good idea to encourage riders and transit worker to look out for one another instead of feeling helpless and being useless when something bad happens.

One serious solution to safety problems on public transit is eliminating transit fares. Again and again transit workers and their unions have pointed to fare disputes as the single largest source of antagonism and violence between rider and operator. Survey after survey bears this out.
However, the concept of transit fares are so ingrained there is virtually no discussion about eliminating fares. Most operators will tend towards enforcement mechanisms for fare payment. This simply shifts the problem to someone else, in this case transit cops who enforce fares backstopped by the threat or use of force. This policy is an utter failure.

Even with transit cops, operators will remain susceptible to the same sort of violence over fare disputes, with fare collectors targets for armed robbery, which can sometimes result in the shooting of transit workers.
Eliminating fares is not about excusing bad behaviour but removing the immediate source of an escalating fare disputes or robbery.

Eliminating transit fares will mean paying for them some other way. Like other public services that are free at the point of access, public transit costs can and should be fully-funded by progressive taxation. But eliminating fares also frees up money and resources.


Fare accounting costs, ticket and pass production costs, and various other costs associated with fares could be eliminated. Immensely expensive transit pass programs can be buried. Even with tokens and tickets eliminated, the Presto card system in Ottawa and the Greater Toronto Area has been enormously expensive. While transit users will save a bit on fares with Presto, the province’s auditor general says hundreds of millions have been blown on its installation.
All these resources could be freed up and focused on better transit services, more jobs, and better infrastructure. Transit workers can be redirected to other parts of the service, such as attendants at major transit stations, retrained for operating, maintenance and other services.


Tallinn, the capital of Estonia, is considered the “free transit capital of the world”. With a population of 550,000, it is not much smaller than Winnipeg. The free transit experiment started in 2013 after a 76 percent of residents voted in favour in a special referendum.
The experiment is still going strong. The service is a hit with residents, ridership is up, and the transit system is even turning a profit. With 1,000 Euros per registered Tallinn resident being directed from income taxes into the system, transit costs are covered. Registered residents are then afforded a pass card that offers limitless travel. We can learn from what has happened in Tallinn. We don’t need to replicate the same funding model or require pass cards.
Some experiments with free transit have also taken place in Canada. Last summer, the Cape Breton Regional Municipality conducted a free transit experiment. The Mayor declared it “successful beyond anyone’s imagination” with ridership growing 200 to 300 percent – far beyond the 20 to 30 percent that was expected. The experiment showed that free transit will be a hit. It also showed how existing transit fares are major access barriers.

Another limited experiment in free transit has unfolded in Kingston, Ontario and points to how free transit could be gradually expanded if it weren’t implemented immediately. Over four years, thousands of high school students were phased in to free transit. Kingston is also conducting a one-year free transit pilot project for the city’s 3,000 welfare recipients.
There are other larger benefits of a campaign for eliminating fares. It is a blow against years of user fees being imposed on our public services. User fees are linked to the same policies that have deprived public transit of major capital funds for the past three decades, and sapped money from desperately needed transit systems for rural and remote areas. Cutbacks in services to fund tax breaks for corporations and the wealthy have been partially offset with user fees as costs have been downloaded from federal to provincial, provincial to municipal. The disgraceful destruction of the Saskatchewan Transit Company is the latest example of this attack.
Last but not least, we can strike a blow against climate change by creating transit systems that actually get people out of their cars and create momentum towards significant transit expansion.
Free public transit at the point of use – paid for entirely through progressive taxation – is the way to go not just for improving our transit services, but also for eliminating the single largest point of tension between transit operators and riders. Transit cops won’t do this. They’ll only bring in more problems. Let’s tear out the fare boxes and let’s ride together in a new direction.
Posted by Fare-Free NZ Editor at 9:00 AM No comments: