Join this Webinar on Friday Climate Justice - Who Pays for a Just Transition?

As we face increasing climate impacts and a rapid rise in the cost of living, what are our options for a just transition away from fossil fuels, and towards a more just world? Who pays? In this discussion, speakers will share ways they are working for a more transformational future What are some ways we can build a more just health, transport and economic system that will make life better for people and the planet - and ensure people have enough money to live with dignity?

We will also launch a set of demands for Budget 2022.

Posted by Fare-Free NZ Editor at 8:32 PM No comments:

‘The time is right’ 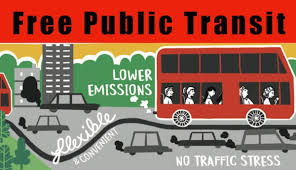 The problem with conservative politicians is when dealing with a crisis, they’re always inclined towards doing the minimum possible in the hope that it will be enough.

The current Government is faced with several crises – including that of inequality, climate, and the rapidly rising cost of living. One response has been to halve the price of public transport for three months.

Why not go the whole way and made public transport completely free, permanently?

Getting rid of fares entirely fits with the Zeitgeist, and makes a lot of sense in terms of the aforementioned crises that the public want dealt with. Fare-free public transport could be an example of the Government doing something truly transformative, as promised.

Yes, it would be expensive. But in the greater scheme of things, it’s really not that much. We’ve learnt this week that the temporary fare cut is estimated to cost around $35m over the three months. It’s therefore been calculated that the Government could have easily just abolished fares permanently for something in the region of $320m/year (which is even less than the estimated cost of the petrol tax cuts for three months).

Indeed, the Ministry of Transport has said that although fares normally bring in about $330m, in recent years this has dropped back to about $200-250m due to Covid-induced working from home etc.

So would forgoing these fares really make a big dent in the budget for the Waka Kotahi NZ Transport Agency? Hardly. The agency currently raises about $4b a year through fuel taxes and road user charges. Only a tiny fraction of this currently goes into public transport.

Foregoing about $300m a year in fares is small change when it comes to climate change and the cost of living crisis. But critics will point out that the cost is likely to be higher, because more services would have to be put on to meet higher demand caused by free fares. But surely this would also be a good outcome? Having a higher proportion of the public travelling by bus and train would reduce carbon emissions, which is something the Government is seriously failing to do at the moment.

Central and local government already invest about $800m per year in running public transport, because it’s acknowledged that such services are a public good. The idea of having a part-charge, i.e. a fare, for this public good seems backwards if we really want to get people out of poverty as well as out of cars. After all, other public goods, like libraries are normally entirely free. And there is a growing awareness that things like public swimming pools should also be free. Perhaps we will one day look back and think it’s weird that we used to charge to use a public good like buses, when they are so essential for assisting public life, the economy, and the environment.

In Auckland, mayoral candidate Efeso Collins is promising fare-free travel for that city, and he estimates it would cost $160m in lost revenue, and an extra $60m to upgrade services. And it’s worth noting that Auckland’s Regional Fuel Tax has raised about $500m, of which $285m remains unspent.

A recent report from Auckland Council estimated that fare-free travel would increase public transport use by 23 per cent, decrease car use by 4 per cent, and reduce the city’s emissions by 3 per cent.

Other mayor candidates are also touting free fares as the way forward. There’s some historic precedent for this, too. Leftwing candidate Jim Anderton promised the same in his 1977 campaign, as did John Minto in 2013.

Such demands are likely to feature in many other local government election campaigns this year. And in Christchurch the regional authority is planning to introduce free fares for all under 25s, students and community service cardholders.

Recently the Helen Clark Foundation also come out with a report advocating for greater subsidisation of public transport.

There’s a shift towards fare-free travel in other parts of the world. In 2013 the city of Tallinn in Estonia was the first in Europe to abolish fares. And then in 2020 Luxembourg followed suit. All around the world, cities like Melbourne and Detroit have started to make parts of their transport network free.

Political parties are now playing catchup on this move towards free public transport.Notably, the Greens have now come out in favour. At the last election their policy was only to make fare-free travel available for those under the age of 18. But the Greens are now seeing the sense in a more radical and universal policy where everyone benefits.

Yesterday they launched a petition for people to sign. But as Stuff political journalist Henry Cooke points out, an ulterior motive is likely to be in the mix: “such petitions are used by the political parties to “harvest email addresses of potential voters”.

So have the Greens been pressuring their coalition partner to deliver something for public transport in the Budget? Not according to party co-leader James Shaw. That they have not been leading the way on a policy that clearly has widespread support reflects how coalition management and compromise currently dominates over their core policy objectives. This is a real danger sign for minor parties in government.

Labour have hinted that they will put more money into buses and trains in the upcoming Budget. Finance Minister Grant Robertson may even have plans to make the half-price fares more permanent. But with a little more pressure applied, Robertson might even feel the need to rejig his draft Budget to come up with something more generous and radical.

Of course proper investment needs to be made in improving the services. Public transport infrastructure has been effectively run down by recent Labour and National governments, as well as by local government politicians more concerned with the needs of private car owners. Investment in infrastructure simply hasn’t kept up with increasing need and population growth. And compared to global use, New Zealand cities now have some of the lower use of public transport in the world.

There will, of course, be opposition to free public transport – especially because it might require more government spending and taxation, meaning the wealthy might see this as a lose-lose situation, in which taxes pay for something that predominantly benefits the poor. National and Act oppose fare-free public transport, with MP Simeon Brown saying yesterday that user-pays is still the best way, and customers need to make a contribution to the cost. Such politicians are always quick to add up the costs of public services, but less keen to draw attention to the benefits (which are intrinsically less quantifiable).

This has been the consensus forever, but there are some signs that Labour might be willing to break free from this. They promised to “build back better” after Covid, which surely means innovating on issues like this. They’ve promised to deal with wellbeing, growing climate emissions, infrastructure deficits and inequality. Getting rid of the petty fares would be an important example of how this could be done. Here’s a simple but effective measure that makes a big difference to all those intersecting problems. But half-measures like fare reductions won’t cut it.

: Democracy Project and Victoria University of Wellington
Posted by Fare-Free NZ Editor at 8:51 PM No comments: