By Thomas Coughlan, Stuff, 12 December 2020
A review into the delays and cost blowout of Transmission Gully is under way.

That’s the equivalent of the entire annual budget for state highway improvements.

A handful of roads have managed to go $1.1 billion over budget, forcing the Government’s transport agency to make tough choices to make its books balance.

It comes as a group has lodged a judicial review to challenge decisions around transport spending, saying that Waka Kotahi NZ Transport Agency had disregarded direct orders from the Government to pivot transport away from roads and towards cycling and public transport.

NZTA gets about $4b a year from fuel taxes and road user charges to spend all over the transport system, building and fixing roads, cycleways, and subsidising public transport.

But in between 2017 and 2020, $1.1b of its funding was ploughed into plugging cost overruns on 17 road projects that went wildly over budget.

The worst offenders were the Wellington Roads of National significance, which went $381m over budget, and a series of Auckland roads that went $352m over budget.

“Construction costs have been increasing at an alarming rate over the past few years. NZTA clearly needs to do more to get costs under control.”

She laid part of the blame at the Roads of National significance programme – National Government roads that have come in seriously over budget.

“National’s mega motorway projects in particular have been blowing out by hundreds of millions over the past term of Government, reducing the amount of money in the transport budget that was available for road safety, public transport and safe cycling,” Genter said.

Genter said she would propose the Transport and Infrastructure select committee investigate construction cost inflation “so we can get a good cross-party view of the problem and potential solutions.”

“The high cost of delivering transport infrastructure in New Zealand, whether road, busway or rail, is not good for anyone. Especially when we need to urgently invest significantly in infrastructure to decarbonise our transport system,” Genter said.

National’s transport spokesperson Michael Woodhouse said his party’s caucus would have to decide whether it would support a select committee inquiry, but the “eye-watering” cost overruns needed an examination.

“Whatever form that takes it is absolutely appropriate that we examine whether that represents value for the taxpayer,” Woodhouse said.

The chair of the committee, Labour’s Greg O’Connor, didn’t indicate whether he’d support Genter’s attempt to get an inquiry started.

“Julie Anne is welcome to bring that to the committee and it will have to be discussed within the committee,” he said.

A spokesperson for NZTA said that plugging the funding hole by moving money from other parts of the transport programme. However, NZTA still planned to make the road programme fit into its three-year budget.

“Waka Kotahi is able to move funding between NLTP activity classes provided the funding allocations remain with the bottom and top of the three-year funding ranges set by the GPS for each activity class,” the spokesperson said.

“We are currently tracking to finish the three-year funding period near the top of that range,” they said.

They also said that some cost overrun figures included next year in their calculation– making the overall figure look larger.

The intervention comes as NZTA faces questions over its alleged bias towards road building and against things like walking and cycling.

Every three years, the transport minister draws up a Government Policy Statement (GPS) telling NZTA what sorts of things it would like funded with transport money.

NZTA takes its directions from that GPS and then decides what it would like to do with transport funding within the boundaries set out by the government.

The current Government has pivoted this funding away from roading projects towards things like walking and cycling.

Despite this, NZTA is forecasting to spend nearly half a billion dollars more than the maximum amount of money the Government earmarked for state highways.

It’s also going to spend tens of millions of dollars less than the Government had earmarked for walkways and cycleways.

But, in an answer to a written Parliamentary question, Transport Minister Michael Wood said that NZTA would in fact be spending $1.296b and $1.483b on state highway improvements in 2019/20 and 2020/21 – a full $479 million more than the top end of the Government window.

NZTA actually plans to spend about half that - just $45.5m and $54m in each of those years.

Movement, a transport advocacy organisation (formerly known as Skypath), has lodged an application for a judicial review of NZTA’s transport decisions, saying they deviated from Government policy.

Chair Christine Rose said “The GPS on Land Transport has specific priorities for NZTA which includes fewer private car trips and reduced greenhouse gas emissions. However, despite being legally required to do so, NZTA continues to develop transport plans that are not consistent with nor ‘give effect to’, these important priorities”

Waka Kotahi NZTA said that it was confident that it’s transport funding decisions “gave effect” to the priorities of the Government.

“Waka Kotahi is confident that our investment decisions through the National Land Transport Programme give effect to the Government’s priorities as set out in the GPS. No further comment will be made on the judicial process,” said a spokesperson.

The application will be heard on February 1 next year.

Posted by Fare-Free NZ Editor at 8:17 AM No comments:

Cost #freepublictransport would be 4% of cost of roads

To put $19m [fares] into context, here’s the cost of some of the other significant transport investments wither considered or made recently. 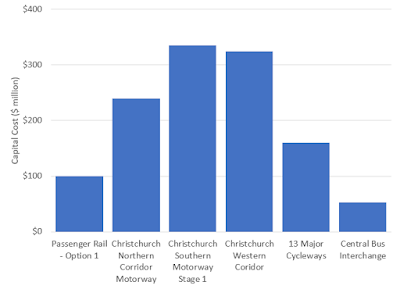 'Do we care about the public?': Cities weigh free public transit amid rising costs
Progressive lawmakers across the U.S. say mobility is a human right and want their residents to be able to freely move around their cities, no matter their income. 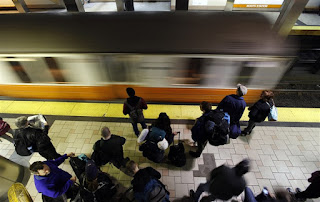 Commuters at the North Station T station in Boston wait as an Orange Line train pulls in on Bill Greene / Boston Globe via Getty Images
By Ben Kesslen and Ludwig Hurtado, NBC News, 18 February 2020
Michelle Wu, a City Council member in Boston, wants everyone to ride for free on subways and buses that crisscross the region.
Wu says the city is experiencing a "transportation crisis" as ridership declines, rush-hour traffic rises and the infrastructure of the Massachusetts Bay Transportation Authority continues to crumble.
The transportation authority needs salvation and money for repairs, commuters and local transit advocates say, but instead of raising fares beyond the $2.90 it costs now if you pay for a subway ride in cash, Wu thinks a solution may lie in dropping fares altogether.
Her position is shared by other progressive lawmakers across the country who say mobility is a human right, like health care and education, and think residents should be able to freely move around their cities, no matter their income brackets. They propose eliminating fares on city buses, light rail and trains to achieve their vision of universal mobility. But some experts warn that free rides wouldn't solve the issues besetting many public transit systems, including crumbling infrastructure, infrequent and unreliable service, and routes that take workers nowhere near their jobs.
Kansas City, Missouri, could become the first major city to eliminate bus fares in June under a proposal in the budget the City Council is expected to approve by the end of March.
Mayor Quinton Lucas said scrapping the $1.50 bus fare would be a windfall for working-class families that spend a good part of their incomes on transportation, and he believes it would benefit the city's economy, allowing people to move around more easily and patronize local businesses.
"Making transit free makes more job opportunities accessible for more people," Lucas said. "We're a car-based city, so if you don't have a car or bus fare, you don't get to where you need to be."
The city would lose $8 million a year on fare-free transit, but Lucas insisted that it would not be "a significant amount" of Kansas City's $1.7 billion budget. By not paying for maintaining and using a fare collection system, the city would save about $3 million a year, leaving Kansas City officials to come up with only $5 million to cover losses, Lucas said.
He said critics rarely ask where the money comes from for other projects, like the hundreds of millions of dollars spent each year on building and maintaining streets or the $325 million to renovate Arrowhead Stadium, where the Kansas City Chiefs play.
"That costs us and local government tens of millions of dollars a year," he said. "So I think the real question people have to ask is 'Do we care about the public?'"
Robbie Makinen, CEO of the Kansas City Area Transportation Authority, said public transit is the glue that holds a community together.
"The return on investment for social justice, compassion and empathy far outweighs the return on investment for asphalt and concrete," he said.
The Kansas City transit authority partnered with the Center for Economic Information at the University of Missouri-Kansas City to analyze the economic impact of the proposed zero-fare policy. The study found that free transit would increase Kansas City's regional gross domestic product by more than $13 million a year and improve the livelihoods of regular riders along with new riders encouraged to try public transit without the fare barrier.
"For those living paycheck to paycheck, as most Americans are, even an additional $50 (the cost of a monthly bus pass) per month of income can make the difference in deciding which bills to pay," the study said.
Kansas City has embarked on similar but smaller experiments before. In 2017, it made transit free for veterans and the next year for ninth- to 12th-graders in four major school districts.
While advocates have championed the move, they say fare-free policies aren't enough if transit isn't accessible.
Comparing 100 metropolitan areas of similar size to Kansas City, a 2011 report from the Brookings Institution found that Kansas City's transit system was among the 10 worst at connecting workers to their jobs, with only 18 percent of jobs in the metropolitan region accessible to job seekers by commutes of less than 90 minutes.
For that reason, city leaders should not look at eliminating fares as a "panacea" for transit problems, said Hayley Richardson, a spokeswoman for TransitCenter, a nonprofit group based in New York City that works to improve public transit around the country.
"A bus that comes once an hour that's free isn't useful to people," Richardson said. "The way we make transit useful to people is by making it come frequently and reliable."
VIDEO: Sky News
Luxembourg is about to embark on an experiment into whether offering zero-fare public transport will persuade people to leave their cars at home. In 2020, it will become the only country in the world to get rid of fares on all its forms of public transport, in a bid to tackle increasing congestion.
23 Dec 2019
Posted by Fare-Free NZ Editor at 11:46 PM No comments: