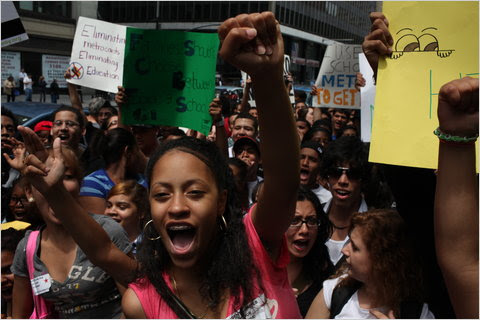 Todd Heisler/The New York Times Students from throughout New York City gather outside City Hall after they walked out of school on Friday to protest the mayor’s proposed cuts of the student MetroCard program.

About 600 students walked out of their high schools on Friday to rally outside City Hall in support of free student MetroCards, which the Metropolitan Transportation Authority has threatened to discontinue.

The students, from at least 18 high schools in Brooklyn, Queens, the Bronx and Manhattan, held up signs and chanted in support of the free rides, which it make possible for low-income students to choose their schools. Some travel for up to 90 minutes to attend classes.

“If it’s not free transportation, it’s not free education,” said Nazifa Mahbub, 16, a student at Long Island City High School who helped organize the protest. The crowd cheered as she addressed the gathering from a podium just outside the police barricades that were set up for the protest.

Though he was invited, Bill de Blasio, the city’s public advocate, declined to attend. His office said that although he supports the fight to preserve the free MetroCards, he did not endorse the idea of students leaving school to demonstrate. Five City Council members, including Robert Jackson, chairman of the Council’s Education Committee, showed up, as did representatives from the Transport Workers Union.

“I support the walkout because the students have organized themselves in order to lobby legislators and the city,” Mr. Jackson said. “So this is an organized protest, and that’s how you are supposed to do it.”

Many of the protesters said they faced little opposition when they walked out of school at the appointed hour of noon, but students from the Roosevelt Educational Campus in the Bronx said that the police, who work to stop truancy, were stationed outside the building and turned dozens back.

“We went out the side door,” said one of the Roosevelt students, Nancy Crespo, 14, who said she cut her history, art and English classes to attend the rally with two friends. She travels across the Bronx, from the Soundview section to Fordham Road, to get to school. (A police spokesman said that while there were officers stationed outside the school, they did not prevent students from leaving.)

The transportation authority, facing budget shortfalls, is scheduled to vote in the coming weeks on phasing out the free rides. The program has been financed in roughly equal parts by the city, the state and the transit agency.