The Locals: Public transport in Auckland 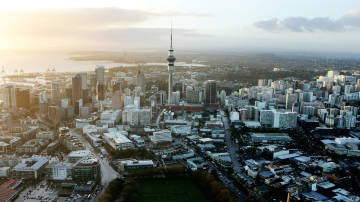 In the first part of our series on local body elections we took a look at housing, libraries and water issues. In this second part of our season on the haunted house of local governance we turn the spotlight on another important issue - public transport.

The only place you’ll find more out of control cars than Kiwi horror The Locals are the streets of the nation’s largest metropolitan centre- Auckland. Local government politicians are like McDonald’s advertisements, both profess to promote healthy alternatives but in reality all they do is clog up arteries and arterial routes.

Big business have done all they can to ensure that Auckland has a public transport that is ridiculed across the world. Visiting Canadian economist Jim Stanford would write in one of his county's major papers a column that deserves wide republishing around Aotearoa,

City planners impose various pseudo-quantitative performance indicators on the contractors, such as sophisticated GPS systems to monitor on-time performance. But even this minimal nod to public accountability produces unintended consequences. Bus companies fear being fined for missing schedule targets, but are driven by the profit motive to ruthlessly minimize outlays on equipment and staff. The resulting pressure is intense on drivers (some of whom don’t even get paid overtime) to meet unrealistic timetables – a media exposé last year showed this often requires breaking the speed limit. Several times, we’ve watched an awaited bus race by without stopping, the driver shrugging helplessly and pointing at his watch.

That anecdote sums up perfectly the system’s irrationality. The top priority becomes ensuring that a private company reaches profit targets, not picking up people who need a ride.

Yet Aucklanders still pay for transit – three times over. Once through taxes – subsidies to private transit consume half of all property taxes collected by the regional government. Then again at the fare box. And finally a third time through inconvenience. No wonder Aucklanders take transit one-quarter as often as Torontonians.

So before you get carried away with enthusiasm for the inherent efficiency of the private sector, visit Auckland. It’s beautiful. But you’ll need to rent a car. 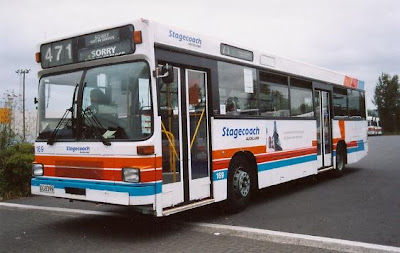 A disaster all right, public transport run down and privatised in the interests of corporate vultures. As Chris Trotter summed it up in a post on his blog,

The Auckland we’ve ended up with is a city of individuals who travel by car. It’s a city based on the tried and true formula: "real-estate equals roads – roads equal real-estate". This is what I call the "Auckland Racket", and it underpins the city’s speculative economy, its nouveau-riche property-developers’ culture and, most importantly, its far-right neoliberal politics.

If anyone has any doubt that selling the country’s rail network to the robber barons of the ‘80s and ‘ 90s like Michael Fay and David Richwhite was a bad idea they need only read the short history of the deregulation of railways provided by the Campaign for Better Transport,

The new owners began massive “rationalisation”, which meant sacking thousands of staff, closing stations & depots, cutting passenger services & some branch lines. The “human presence” of railways vanished as the workforce necessary to market, manage, load & operate the system were laid off. Soon less staff meant less business & less profit. This neglect of customer’s needs was quickly catered for by hungry truckers who soon captured the freight market from smaller business in the provinces.

Tomorrow the Green Party will rally its supporters of public transport for the launch of a campaign- Fast-Track the CBD Rail Loop. Under the slogan “A Super Rail Network for a Super City” the Greens aims to put pressure on Government policy makers for a “greater sense of urgency”. The facebook event has just 11 attendees suggesting that Aucklanders themselves aren’t all that bothered about the rail network. Yet a 2003 survey showed that poor public transport was the second most common complaint about living in the Auckland region (traffic congestion was number one).

According to the giddy McCarthyites of the Act Party, public transport advocates are, “scared of cars because automobiles allow individuals to make their own decisions. Car drivers can turn left or right, they can travel for miles or stay in the city, they can live out and commute in or live in and commute out. Planners and politicians can’t control them.”

Riiiggghhttt. I mean how many car turns can a car make when it is stuck in gridlock? The hilarious reality is that Auckland’s traffic jams and low public transport use are the direct result of the privatisation shock doctrine that the new right darlings brought about in Auckland in the early 1990s: “bus boardings declined from 42 million per year in 1990 to 31 million in 1994 – a drop which is not correlated with urban density or dispersed employment, as neither of these factors changed substantially over the period” 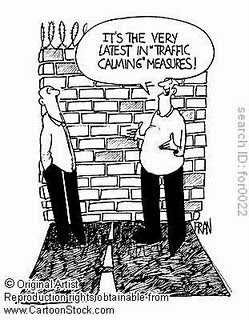 We don’t even have to look very far back to realise that this current crop of local body politicians hate sensible transport. Take the November ’08 announcements in John Bank’s “Christmas Grinch budget” where he slashed public transport in order to fund more roads and the Rugby World Cup piss-up. Socialist Aotearoa at the time said, “The $345 million dollar Eastern Highway will mean we can keep on driving till the icecaps melt and the oil wells run dry. Just don’t worry about what we’ll do after the oil runs out because this Council plans to cut footpath, cycleways and walkways spending by $66 million, public transport spending by $20.8 million and new park-and-ride facilities will be slashed by $5 million. So say hello to Smog City, a city where Banks can drive his Bently down the freeway while we all eat dust.”

2010 and not a lot has changed for Auckland. The Auckland Regional Council’s regional growth strategy makes for alarming reading,

• Car use is growing by around 4% pa.
• Congestion is perceived by the public to be one of the region’s most significant problems.
• Vehicle use , especially under congested conditions, is a major source of pollution.
• Total cost of congestion to the region is estimated in the order of $750 million pa including loss of production and costs of delay in moving goods. 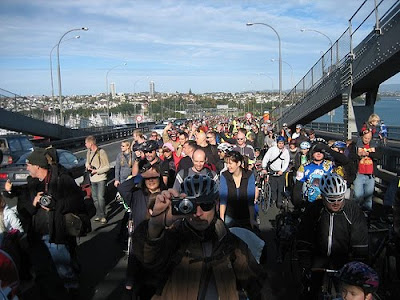 Both of Auckland’s mayoral frontrunners profess support for further development of Auckland’s public transport system but cynics might say there proposals for integrated ticketing and upgrading ferry and rail networks are simply- too little, too late. Aucklanders who seriously want to unfuck the public transport system will need to do more than vote to end local Government inaction. Getting active in community campaigns for free and frequent public transport and against further roading spending is the first step. Fighting for public ownership of transport companies and free and frequent public transport as well as a massive investment in the innercity loop, rail link with the airport and a cycle lane on the bridge won't be easy. Direct action like the GetAcross Harbour Bridge protest or the anti-SH20 protests will no doubt become more common, but Aucklanders have to keep fighting for these improvements and more if they want a liveable, sustainable, free flowing and connected worldclass city in the future.

Post by Omar. From socialistaotearoa.blogspot.com
Posted by Fare-Free NZ Editor at 9:21 AM