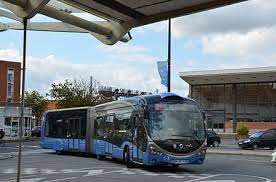 France Dunkerque town [Dunkirk, France] goes completely over the next autumn for free public transport to the city residents to rejuvenate and revitalize the city's heart. Already, there can be a free rides on the weekends.

Tallinn's delegation, headed by the executive Mayor Taavi Aas the [group] visited France for Dunkerque city, going over the next year from September to complete a free public transport. So far, they have experimented with free public transport on weekends, and the results are positive. "Thanks to free ride on the buses started to use more of both young and older people," said the head of the Department of the Environment Dunkerque GHESQUIERES Cedric, who said they plan to free public transport throughout the city during the redesign. "We want to make the whole town, and it's a big job," he stated. "We want to change the heart of the city once again an attractive place not only to change modes."

Went to study in Tallinn (capital city of Estonia)

Dunkerque city official said was that they set up for free public transport, a major role to play in Tallinn. "We had to find an example in which the free public transport running," said GHESQUIERES. "Tallinn was a big enough city, and we looked at how it works with you. You are, after all, the pioneers. We were also people who doubted the idea, but the first results are not yet dissipated. Dunkerque expects the number of public transport users to double."

The total includes a free shuttle to the area of ​​200,000 inhabitants, with a population of 90,000 as of Dunkerque is introducing free public transport, not only the city, but it also extends to the neighboring region.

Public transport in France is funded by private companies. All companies with more than 11 workers, paying the relevant tax authorities, for transport or movement of people better, after all, businesses will bring in more customers.

Tallinn executive mayor Taavi Aas said that the representative of the city of Dunkerque pioneered last year in our study of the transport system. "They visited us and watched as free public transport in Tallinn is organized. Without a doubt, they have learned something from us. Now it was our turn to look at how these things are going."

Tallinn Transport Department director Andres Harjo said Dunkerque problem lies in the fact that most of the people living in the city by the sea or farther from the heart, which is why the city is trying to put people back downtown to visit a free transport. "Trade is, after all, mainly in the center," said Harjo. "And in the course of conversations with the French revealed another interesting fact - if the person to be downtown by car, there he spends a lot less time than if the bus."

Tallinn's representatives also presented at Dunkerque bus fleet, which is planned before the final transition to overhaul the public transport free of charge.

Harjo said the likeable that Dunkerque has brought quite a lot of new lines of buses. "Over 50% of buses using gas as a fuel - it shows that the local authorities take care of not only the people but also the environment," says Harjo. "True, these diesel buses are now much older than our buses."

In addition to upgrading the cityscape and massive road construction is planned to raise the level of public transport as a whole. "We are not important for the simple fact that public transport would be free of charge, at the same time we want to improve its quality," said GHESQUIERES. "We plan to free public transport in relation to invest a total of approximately 65 million euros."

Also, the entire route network of free public transport before final deployment to reorganize the buses would move more often and more appropriate places, or people would be available to them. Among other things, it is planned to introduce more high-speed buses. 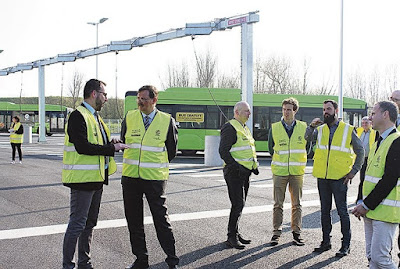 Taavi Aas said that the idea of ​​free public transport is spreading ever more widely.

"Europe is already quite a lot of cities that are planning the introduction of the free shuttle or already doing it," said Aas. "In France alone is already a few dozen such cities in Poland and is a free public transport in the city from 20 to 30 over the past. Tallinn is planning this year to further upgrade its bus fleet -, we will buy 50 new buses, including 20 particularly environmentally friendly hybrid buses, trams and the renovation of ten."

Andres Harjo said that the idea of ​​free public transport in Tallinn further. "People, it is important that the ride would take the least possible time," he said. "By public transit must generate ever greater advantage of other transportation front, from the traffic lights prioriteedisüsteemidest and new bus lanes was, and why not also think of fast bus lines. This all lead people to public transport access. One good example is the Pirita bus path, but they could be more of a difference."

Free public transport in the promise of the 2014 elections was the current mayor of Dunkerque Patrice Vergriete main promise. As the city population is decreasing, thanks to the media arose the interest of Tallinn, where, thanks to a free public transport is the official number of inhabitants has grown to nearly 400,000 people.
Posted by Fare-Free NZ Editor at 6:23 PM