European cities are increasingly looking toward free transport in a bid to combat air pollution.
Anne Hidalgo, the Paris mayor, is the latest local leader hoping to make public transport free across the city, emulating the success of a handful of small towns across France which let residents board buses and trams without paying a cent.
The German government is also considering rolling out free transport across the entire country - with the same aim as in France of reducing air pollution - if a pilot scheme in five big cities this year works out.
Niort in western France has been running free buses since last September for its 125,000 inhabitants.
The scheme has been an enormous success, boosting passenger numbers by 130 per cent on some routes, slightly reducing the number of cars on the roads, and costing the town little more than when people had to buy tickets, said mayor Jérôme Baloge. 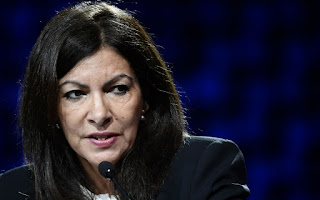 Mayor of Paris, Anne Hidalgo, is keen to make the city less polluted by the 2024 Olympic Games  Credit: PHILIPPE LOPEZ/AFP/Getty Images
But he agreed that making metros, buses, trams and suburban trains free in a big city is a far more radical, if not revolutionary, idea.
“In Niort the revenue from ticket sales represented only 10 per cent of cost of running public transport. In Paris it’s around half… And our buses were often half empty, while in Paris the metro and buses are packed,” he said.
Ms Hidalgo said last week that she was commissioning a study into free transport and wants officials and experts to report back by the end of 2018 on whether the scheme would be financially feasible.
The mayor has made a priority of tackling smog and is to ban diesel cars in the capital by 2024, when Paris will host the Summer Olympics.
The study will also look at the possibility of introducing a toll, like London's congestion charge, to discourage motorists from driving into Paris.
Supporters of the toll say it could be used to offset the cost of providing free transport.
Ms Hidalgo only has power over the city of Paris, which with 2.2 million residents makes up only a small part of the greater Paris region with a population of more than 12 million - 4.2 million of whom use public transport.
Valérie Pecresse, the conservative head of the wider Paris region and a rival of Ms Hidalgo, said she was "open to all new ideas" but warned the mayor against "going it alone" on free transport.
Ticket sales bring in €3 billion (£2.6 billion) a year that offset the total transport budget of €10 billion for the region, she noted, saying that this would have to be compensated for somehow and that she would not settle for "a euro less".
There was similar consternation about who was going to pay when it was revealed last month that the German government was looking at plans to make public transport free to try to reduce road traffic and lower pollution levels.

Free transport will be tested in five cities, including the former capital Bonn and the industrial cities Essen and Mannheim, by the end of the year, and if successful will be rolled out to more cities across the country, ministers said.
But Helmut Dedy, the head of the Council of German Cities, warned that the federal government would have to finance public transport if it wanted to make it free.
Most local transport in Germany is owned by municipalities.
Greenpeace came up with an original idea - it proposed that the government “should make sure that the car manufacturers finance the emergency measure” of free transport.
Posted by Fare-Free NZ Editor at 6:59 PM