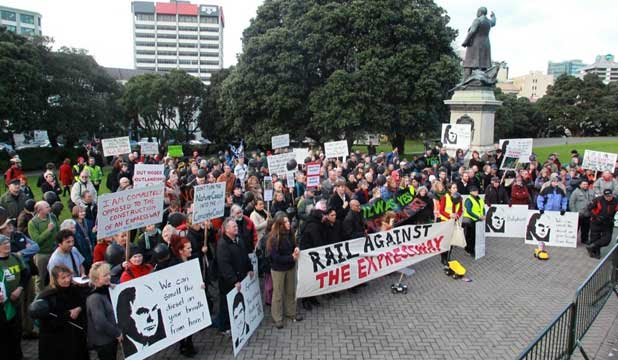 They came on the train from the coast, others walked from their city workplaces and some came by bicycle.

About 300 protesters brought a colourful and vocal message to Parliament today - they do not want the Government's proposed Kapiti Expressway.

Their banners read "Rail Against The Expressway" and "Riding Rough Shot Over Kapiti'' and carried images of Transport Minister Steven Joyce and National's MP for Otaki Nathan Guy.

Forty-three homes will be demolished under the proposal and a further 33 affected under the planned route for the McKays to Peka Peka expressway.

"It's not just about a few people losing their homes. It's about destroying Raumati, Waikanae, Otaki and Paraparaumu.''

"Environmentally it's a disaster, socially it's unacceptable and economically it doesn't stack up.''

The Government's consultation on the expressway had been a ``joke'', Begovich said.

"People don't get back to you. I've been waiting six weeks for a New Zealand Transport Agency representative to get back to me. Steven Joyce has never met publicly with anyone that's asked him to.''

The protesters presented a 4000-signature petition to Joyce and Guy asking the Government to revisit the previous proposal for a community link road.

"The community link road was a well planned, well designed road that was for Kapiti and for the greater good of New Zealand.''

MPs from all sides of the political spectrum came out of their offices to see the protesters.

Labour MP for Mana Kris Faafoi said the Government's move to cancel a public meeting on the expressway just before last year's by-election was "cynical politics''.

"I think everyone was keen to find out what the plan for the expressway was and it was proving very unpopular a few weeks out from the byelection. So all of a sudden they went quiet on the people.''

The expressway was the number one issue on the Kapiti Coast, he said.

"Nathan Guy was all for the link road before the 2008 election. The expressway wasn't even in his vocabulary. He's gone back on his word''

"Communities do need to be listened to when they feel really strongly about these issues.''

Begovich said she had invited both Joyce and Guy to meet with protesters. Neither were anywhere to be seen.

"Nathan Guy will lose his seat because of this. It's about time he listened to the community.''

Posted by Fare-Free NZ Editor at 9:21 AM