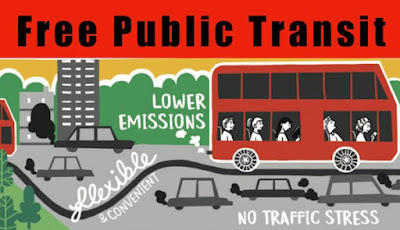 By Wojciech Kębłowski, International Viewpoint, 10 September 2019.
We don’t put coins in street lamps or pay by the minute in public parks. Here’s why we can make subway and bus fares a thing of the past.
If we are to believe transport experts and practitioners, abolishing fares for all passengers is the last thing public transport operators should be doing. For Alan Flausch, an ex-CEO of the Brussels public transport authority and current Secretary General of International Association of Public Transport, “in terms of mobility, free public transport is absurd.”
According to Vincent Kauffmann, a professor at University of Lausanne and one of key figures in sustainable mobility, “free public transport does not make any sense.” Getting rid of tickets in mass transit is judged “irrational,” “uneconomical” and “unsustainable.”
However, if we turn to commentators from outside the field of transport, the perspective on fare abolition changes radically. Social scientists, activists, journalists and public officials—often speaking from cities where fare abolition has actually been put to the test—fervently defend the measure.
For Judith Dellheim, a researcher at Rosa-Luxemburg Stiftung in Berlin, providing free access to public transport is the “first step towards socio-ecological transformation.” For Michiel Van Hulten, one of the earliest proponents of free public transport in Europe, “it is about returning to the commons.” Finally, according to Naomi Klein, this is precisely what cities around the world should be doing —“to really respond to the urgency of climate change, public transport would have to become free.”