Blog Action Day: Use the tools at your disposal! torsdag 15 oktober 2009

This blog post is written in English as a part of the Blog Action Day on climate change.

Today the web will probably be flooded with blog posts about how green technology will save us from the horrors of climate change. Some posts will be constructive and original, but a lot of them will probably just be deterministic and overly optimistic. As a contrast to this, we at Planka.nu would like to put the spotlight on what could be done today with political reforms that we have the tools and knowledge to implement. Such as a politically driven change of our infrastructure and simple green tax-switching policies.

In Stockholm and Sweden, we currently have politicians who plan to expand our large road network even more and constantly raises the fares on climate-smart means of getting around such as public transport. At the same time as they are doing this they are not willing to take responsibility for the ever-increasing car-traffic. Our politicians will not acknowledge that there are political reasons behind the fact that car-traffic is taking (and will do so even more according to current projections) market shares from public transport. Instead they blame it on the constantly growing demand for car-traffic, as if supply and demand only had a one-way relation.

More roads and more expensive public transport equals more car-traffic on the expense of public transportation; an equation so easy that even a five year old would understand it.

The transport sector is one of the biggest climate scoundrels in Sweden, accounting for around 40 percent of our greenhouse gas emissions, in other words: it is one of the most urgent sectors to make climate-smart.

We in Planka.nu believe that the key to radically decrease the emissions from the transport sector lies within our cities, partly because they are hosts of most of the traffic and partly because their population density provides a good framework for easy and relatively cheap climate adjustments.

In September 2009 we released the report Travel doesn’t have to cost the earth, where we present five concrete measures to make the transport sector in Stockholm climate-smart. This whole package of reforms are built on the idea that we do not have the time to sit around and wait for the green technology to save us, rather the opposite: we need to act now, and we need to do it with the tools that are currently at our disposal.

The five measures we present in Travel doesn’t have to cost the earth are:

The fact that we can not know what kind of green technology solutions that will be available in the future is a very obvious one. But considering that blind trust in technology development is the dominant position in the climate debate, it is still worth repeating. On the other hand, one thing that we do know for sure is: changes in the infrastructure as well as simple green tax-switching are effective policies that are available to us today.

So, instead of wishful thinking and naive believe in technology we promote measures that will lead to concrete results – i.e. a reduction of the greenhouse gas emissions from the transport sector – and can be carried out with nothing else but the power of political will. 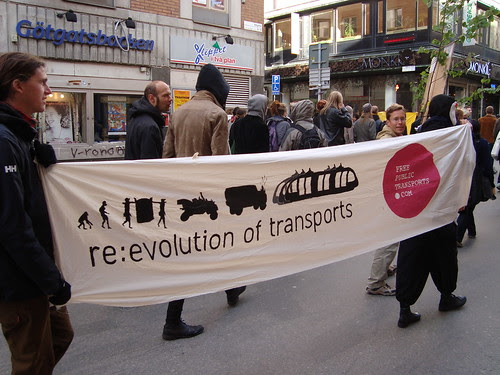 Posted by Fare-Free NZ Editor at 9:27 AM