'Business-as-usual' could render much of world uninhabitable 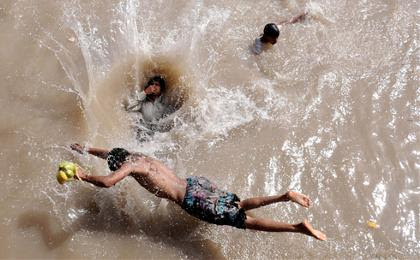 Pakistani youths cool off in a canal during a heat wave in June 2009, as temperatures soared to 117 degrees in some parts of the country. Extreme heat stress due to global warming could render much of the world uninhabitable in upcoming centuries, according to new research.
CAPTION
By Arif Ali, AFP/Getty Images
Hot enough for you?

A worst-case scenario of global warming, in which temperatures would soar some 21 degrees, is that much of the world may simply become too hot for humans to live in, according to new research published last week in the Proceedings of the National Academy of Sciences.

"We found that … a 21-degree warming would put half of the world's population in an uninhabitable environment,"says study co-author Matthew Huber of Purdue University.

While the Intergovernmental Panel on Climate Change found that the result of business-as-usual warming would be 7 degrees by 2100, eventual warming over several centuries of 25 degrees is feasible, says Huber.

The new research calculated the highest tolerable "wet-bulb" temperature that humans can withstand.

"The wet-bulb limit is basically the point at which one would overheat even if they were naked in the shade, soaking wet and standing in front of a large fan," says study lead author Steven Sherwood of the University of New South Wales in Sydney.

The researchers found that humans and most mammals experience a potentially lethal level of heat stress at a "wet-bulb" temperature above 95 degrees sustained for six hours or more.

Researchers say that while wet-bulb temperatures of 95 degrees never happen now, they would begin to occur with global-average warming of about 12 degrees, calling the habitability of some regions into question.

"We show that even modest global warming could therefore expose large fractions of the population to unprecedented heat stress, and that with severe warming this would become intolerable," the authors write.

"If warmings of 10 degrees C (18 degrees F) were really to occur in next three centuries, the area of land likely rendered uninhabitable by heat stress would dwarf that affected by rising sea level. Heat stress thus deserves more attention as a climate-change impact."